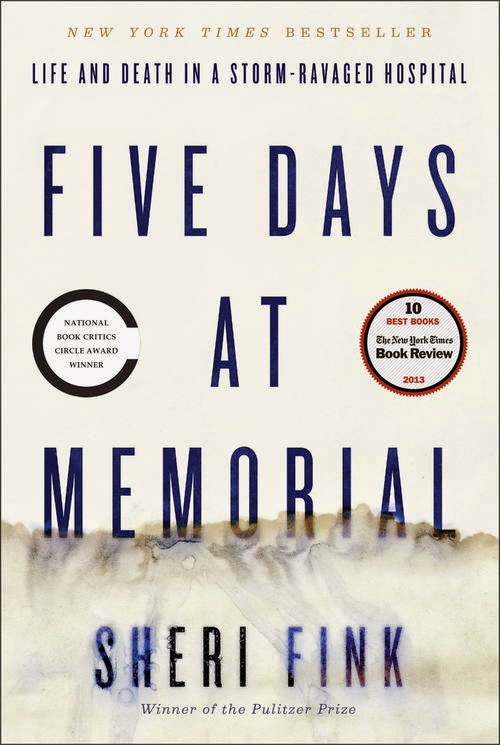 Oh Five Days at Memorial... I wanted so much to love you like I thought I would, but... well, we'll get into that.

Before we start, you should probably know that I'm fascinated by medicine in general, I like (hypothetically!) thinking about ethical dilemmas, and find seeing how humans react to natural disasters fascinating (although living in Japan puts me in a bit too much danger of actually being a victim of a natural disaster for my liking!). So given that this book is about possible euthanasia performed at a hospital in New Orleans during hurricane Katrina, you would think it would have been right up my alley.

And it was, for the first half at least. The book starts in the middle of the disaster, and then goes back to the beginning, to the preparations (or lack thereof) made for it, to previous hurricane damage in New Orleans and the aftermath, and what people should have learned from it, and then goes into what happened during the hurricane itself. I really enjoyed (although that is not quite the right word) all of the first half of the book, up until everyone had either been rescued or was dead. I even stayed up late reading it on a weeknight, which I don't do very often.

My problems with the book really started in the second half when it was talking about what legal action was taken, who said what about whom, and what was going on in general. My main issue was that there was far too much information for me. There were a lot of people who were working in the hospital during the hurricane in the first place (and although I was much more interested in that part, I did feel a bit overwhelmed by it), and then introducing all of their lawyers, the prosecution, people doing other investigations into the case just became too much. I couldn't keep up with who everyone was, and the narrative seemed to jump around all over the place. I think it was trying to keep everything in chronological order, but I just found it confusing. I also would have been quite happy to just read a really pared down version of what happened afterwards, and the issues that it had raised, rather than a whole run-down of exactly who said what and when. I just found it a bit tedious.

For example, when talking about the main surgeon who was accused of performing euthanasia, Anna Pou, it talks about how she was treating one of her long-term patients, and spends a fair amount of time talking about him.. and he wasn't actually involved in the hurricane in any way. I understand that this was to highlight the good sides of her character, her devotion to her patients and the fact that she ended up not being able to treat him any more after being arrested, but it could have been easily shortened or just mentioned as an aside.

The book does raise some important ethical questions on whether euthanasia was an acceptable choice here (if that is actually what happened, that is), whether it is ever acceptable, what medical professionals should actually do in the face of disaster and so on... and I'm sure that if I was reading it as part of a class on that kind of issue or something, it would have been perfect. I just think it was a little too dry to be read for pleasure, which is why I read.

As a disclaimer... I read the second half of the book while feeling a bit under the weather, which probably affected the amount of patience I had. I did actually realise this and switch to a different book for a while, but when I came back to it feeling a bit better, I still had the same issues.

If you're interested in the book, I wouldn't tell you not to bother reading it, but I sort of wish that I'd just read the original article that the book was based on. Basically, I wanted just the five days at memorial of the title, not the years of case building and litigation that followed.
投稿者 Jimjamjenny 時刻: 16:55