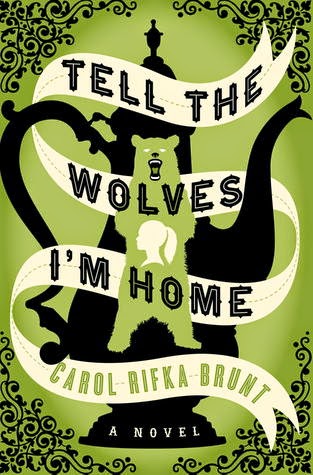 One of the reasons that I haven't updated in a while is that I have read a lot of books about which I'm having difficulty finding coherent things to say, and this book is definitely one of them. So if this post makes little sense, this is why!

As such, this review may be a bit spoilery, because I honestly have no idea how to talk about it in a spoiler free way.

Tell the Wolves I'm home is the story of June, whose uncle and best friend, Finn, dies from AIDS. It's mostly about the unlikely relationship that she develops with Finn's secret boyfriend, Toby, and her relationship with her sister, Greta.

I'm sure that I have said before that I have a weakness for stories about sisters, and this one captured a certain kind of sister dynamic perfectly. Greta and June were once really close, but have drifted apart, and find coping with Finn's death is half making them drift even further apart, and half bringing them back together. They both seem to be coping with his death in completely different (but completely understandable) ways, and I really enjoyed (if that is the right word, which it isn't) seeing the way they interacted with each other.

One of the other huge elements of the book is June's relationship with Toby (arguably much bigger than the sister stuff, but I have sister based fiction priorities, dammit!), which I also thought was portrayed completely realistically. They both react to each other and their situation in ways that made complete sense, and it is enjoyable seeing them forge new ties in the wake of Finn's death.

The book is set in 1987, and everybody is still pretty ignorant about AIDS (although not as ignorant as they would have been a few years before then), so you also see how June and her family cope with how the rest of the community that they live in reacts, and how June's parents reacted before and after Finn's death. It's really depressing in a lot of ways, and it made me wonder how much has actually changed... Obviously, we now know a lot more about AIDS and treatment is available now that wasn't then, but I can't help but think that a lot of families might still react exactly the same way as June's does.

This book is definitely a tearjerker... although I generally don't see that as a bad thing! I didn't feel like I was being manipulated into crying as I have done with other books *cough* fault in our stars *cough*. I really REALLY liked it, the whole thing was skillfully done, it was never too sentimental, and it was realistic without being ridiculously gritty and hard to digest.

Tell the Wolves I'm Home appears to be Carol Rifka Brunt's first book, and if her first one is this good then I have high hopes for her future work!
投稿者 Jimjamjenny 時刻: 20:30 1 件のコメント: