Jen reads... The Proof of Love by Catherine Hall 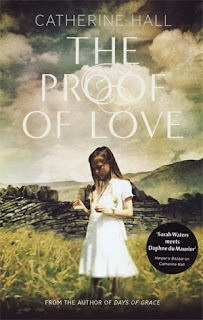 By the time the summer holidays begin, Spencer Little is keen to put the events of the past term at Cambridge behind him and a remote village in the Lake District seems to offer the perfect escape. But it's not so easy to remain anonymous in a small community and, after striking up a friendship with ten year old Alice, Spencer also finds himself being drawn into other people's lives. As the summer heatwave intensifies and a web of complicity tightens around him, Spencer realizes that he will eventually be forced to choose between loyalty and truth, between logic and passion.


I have had this book on my kindle for a while, and I'm pretty sure that I bought it because it won the Green Carnation prize (for writers who are in the LGBT community), and... I probably heard somebody gushing about it on one of the book podcasts I listen to? Not sure. Anyway, it had sat on my kindle for a while, and the only reason that I ended up reading it is that I asked my husband to randomly pick something off my TBR list for me to read next. It turned out to be an excellent choice!

I loved the setting of the book. I read it just after reading The City and the City by China Miéville (which I really enjoyed!), which is set in... well, it's difficult to describe, but it's two cities that are superimposed on each other, and it took me quite a while to wrap my head around the setting, so it was a bit of a relief to get back to the English countryside, a setting that I am more familiar with. Although having said that, I've never read any books set in the lake district, so that was quite interesting! To be honest, even though I have met people from that area, it doesn't exist in my head as a place where actual people live (if you know what I mean). The countryside is beautifully drawn in the book, and the relationships between the people in the local area all felt completely real.

I really enjoyed seeing Spencer slowly find his place in this community, while also struggling with the demons he has been trying to escape from. Although I wasn't entirely sure what to make of him at first, as we find out more of his back story I came to really like him as a character, and as someone who is more often than not the newcomer who doesn't quite fit in I really sympathised with him. I love his relationships with everybody else in the book, and the way that he slowly comes to be more accepted by the community.

And then... I can't really talk about the other things that I loved, because they would be massive spoilers! But overall although this book is definitely a slow burner, it completely won me over by the time I was a couple of chapters into it, and by the time I had finished it I was so overwhelmed with feelings that I ended up feeling weirdly empty, like it was too much for me to actually be able to express anything. It was really beautiful and heartbreaking, and I really recommend it! I'm definitely going to go and track down her other books now.

Things got a little bit crazy in October - I went to Australia for a friend's wedding (which was beautiful!), went to Fukuoka (where I used to live), and then moved house! Once I had moved house I ended up feeling a bit down for a couple of months (this happens every time I move), and I also apparently had whooping cough (despite having my vaccinations when I was a child) from August to the end of December. Fun times!

This year so far I've been pretty busy with work (I miss when I was just starting out and would have occasional weeks with no new work at all - now I tend to work at least one day most weekends, and only have the occasional weekday where no new work comes in), but I'm starting to adjust to my new life here and my workload now, so... hi again blog!

I have been reading a LOT recently so I'm excited to talk about some of the things I've been reading here! I think I'm also going to start writing more about things outside of books and reading.