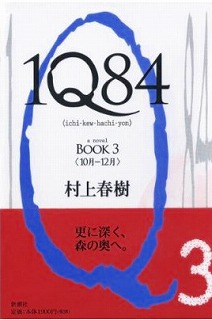 So 1Q84 is a bit… slow isn't it? Not in a bad way, at all, but there is a LOT of character building etc. to get through before it starts getting I can’t put it down!!-good. It may just be that I’m more sensitive to this because I read it in Japanese. I definitely read slower in Japanese than I do in English, and as a result I take in EVERYTHING in the book. Which is not a bad thing at all, but it means that I read every single word of the book (and sometimes have to take the time to puzzle out what a sentence actually means, or look stuff up in the dictionary). I don’t know how everybody else reads in English, but I definitely do not stare at every word and try to understand its meaning before going to the next one.

What am I trying to say? Well, it is definitely worth sticking around to the end, because… book 3 is awesome. I think, to be honest, that this might be my favourite Murakami so far. As soon as I finished reading it, I wanted to start again from the beginning. Good thing I have the new Murakami to read! Hehe.
If you haven’t read any Murakami yet… maybe don’t start with this one. It’s huge, and potentially intimidating. But, it is also great.

Bullet points! For the whole thing, not just book 3. If you haven’t read it yet and want to know nothing before going in (which I would recommend) don’t read this!


And on a Japanese related note… Murakami really stands out to me as a marker of how much my Japanese has improved, as the first book that I ever read in Japanese was Norwegian Wood. I get SO much more out of his books now than I did then, and I can go for whole stretches without coming across any words that I don’t know, which makes me happy. It makes me want to go back and reread everything by him that I read in Japanese up until... about 3 years ago, because I think that I would enjoy them in a completely different way.

I've read Murakami in both English and Japanese, but I definitely think that his stuff is better in the original. Not that the translations aren't good, because they really REALLY are, but there's so much stuff which just can't be put across in English that you get from Japanese. (Obviously it works the other way round too. Harry Potter in Japanese really bored me, but in English it's full of yay!)

Alas, my shelf of unread Japanese books is telling me that I really shouldn't do that.


Writing this has made me realise that I should really try to read more Japanese at the weekends and at night, because I am getting through his new book ridiculously slowly. But then once I've finished it, I won’t have any Murakami lined up to read! And that will make me very sad.
投稿者 Jimjamjenny 時刻: 21:00