Jen reads... Colorless Tsukuru Tazaki and His Years of Pilgrimage 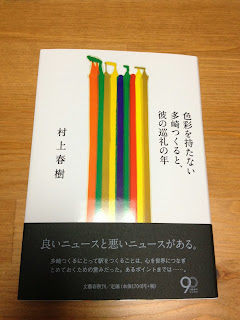 I finally finished reading Colourless Tsukuru Tazaki and His Years of Pilgrimage （色彩を持たない多崎つくると、彼の巡礼の年 in Japanese） by Murakami Haruki. And I'm happy to say that I really enjoyed it! I actually ended up reading it really slowly, to savour it, as I'm getting to the point where there are very few Murakami novels left to read... Also I've been slightly stupidly busy recently, boo!

The story follows Tsukuru Tazaki, who is an engineer who makes/remodels train stations by day, and... does the normal Murakami main character thing of being alone/cooking etc at night. Surprising! When he was at high school, he was part of a ridiculously tightly knit group of 5 friends, who all suddenly turned their back on him a year or so after everyone had gone to university. This group of friends is the main focus of the story, and spurred on by a new love interest, Tsukuru decides to try to find out exactly why his friends suddenly cut him out of the group.

I was bound to like this book because... Well, firstly it's Murakami, and I don't think he's written anything that I actively dislike. I also like trains (not in THAT way, but there is nothing better than a good train journey. I really wish that I had more reasons to take the Shinkansen, sigh), so all of the train and station talk was good, and I've been thinking a lot about friendship recently for various reasons, so I enjoyed all of the ruminations on the nature of friendship. Also, as always, I got introduced to some nice classical music! Yay.

The book is definitely more along the lines of Norwegian Wood, as it's almost completely realistic. There isn't really much surreal stuff going on in the background, and it definitely feels much more grounded in reality than, say, 1Q84 is. Although of course there is a bit of that thrown in, because it is a Murakami.

I'm really curious about how they're going to pull off some of the translation, as one of the recurring themes of the book is colour (as you can probably tell from the title). This is revealed very early on in the book, so I don't think that I'm going into spoiler territory here, but the reason that Tsukuru is "colourless" is that the other people in his group of friends all have surnames with colours in. 赤松 (red), 青海 (blue), 白根 (white) and 黒埜 (black). Tsukuru, whose surname Tazaki (多崎) literally means many capes (um, not the item of clothing, but headlands - it would be awesome if it meant the item of clothing though!) doesn't have a colour in his name, so he is colourless. Which makes sense. But, that is going to be hellish to translate. If you can read Japanese, it's obvious that the colours are there, but it's either going to need a long winded explanation in English, or something, and I've been thinking about it, but really can't come up with a good way to get it across without just stopping the flow of the book to explain. And this is why I'm not really interested in becoming a literary translator!

I would write more, but I don't want to spoil the book for anybody waiting for the English translation... so  but if you're a Murakami fan I think that you'll like it! Yay! Be excited! And if you're not a Murakami fan (yet), it might be a good one to start with as it's not intimidatingly long, and it's not as weird as some of his other books.