Jen rambles... about Harry Potter and other stuff

Today is the last day of a 3 day weekend in Japan, yay! Although, boo, last day! I normally don't like to leave my house at the weekends, because I'm antisocial, but I've been surprisingly social for me recently. Last weekend I went to see an English version of Avenue Q in Tokyo, which was funny, although I would have appreciated it if the person sat behind us hadn't been making comments all the way through it... you're not at home in front of your TV, shhh!

On Thursday I went to a gathering for alumni of my university (I honestly have no idea what it was for, heh), which was also surprisingly fun! I don't normally go out on weekday nights, mainly because I get really tired the next day, but I think sometimes I should. It's good to break up the routine a bit.

Then on Saturday I went to a home party thrown by one of my friends from work, which was also fun! And I persuaded my husband (who is just as antisocial and averse to meeting new people as I am) to go, and he had fun too! Yayyy! Also, yum, food.

My husband is currently working his way through Harry Potter, and is currently on the Prisoner of Azkaban. He hasn't read them before or seen the films, but he's got really into them, in spite of the fact that he's made fun of me since we met for liking the books. Hehe. He was trying to tell me his theory on where the book is going, but couldn't remember Peter Pettigrew's name so called him Spaghetti instead. And then kept on going "Damn you spaghetti!!!" hehe.

Okay, that wasn't very interesting, so have a random Japan picture! 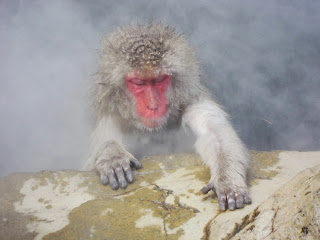 This was taken at an onsen in Nagano prefecture, where monkeys come in the winter. Understandably, as Nagano when I went (last year in November) is FREEZING!