Jen reads... The Fault in Our Stars 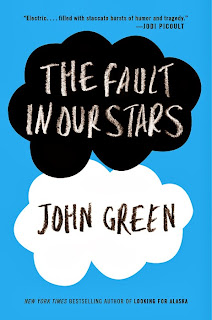 Okay, so I have a confession to make first. When I was about 10 or 11, I was really obsessed with a series of books in my local library called Sweet Goodbyes. Basically, from what I can remember, the premise was that in each book, the main character probably had some kind of terminal disease, and made a friend/had a boyfriend/had a childhood friend who then died of either the same, or another terminal disease.Yup. I was a pretty morbid 11 year old. But for whatever reason, these kinds of stories appeal to me. I can't be the only one, otherwise that series of books wouldn't have existed, right? Right?!

So.. I kind of figured this would be like those, but well written. So I ignored the fact that a lot of blogs that I read were quite critical of the book, and had already decided to read it at some point, when I realised that one of the podcasts that I listen to (literary disco) were going to have an episode about it (yes, I realise that episode was months ago, but I'm in the middle of catching up!), so decided to read it last Tuesday morning. And by Wednesday morning I had finished it. And in spite its myriad problems, I enjoyed it! As much as you can enjoy a book about cancer, that is.

I'm sure everybody knows the main story by now, but just in case... the main character, Hazel, has terminal cancer, and she meets a dreamy boy, Augustus, at her cancer support group, and they fall in love. You can probably guess the rest of the story. There are going to be spoilers below so be warned!

The book has lots of things that could potentially be really annoying about it:

The cigarette thing (stupid. but I might have been like WOW THAT'S SO DEEP! if I had read it when I was 15)
Meeting the author that both Hazel and Augustus admire, who didn't come off as realistic in any way to me. And then him coming to the funeral? That's just stupid.
Hazel thinks that she's not much to look at, but is obviously beautiful (her and Gus are so beautiful, in fact, that random passersby tell them that they are beautiful when they are in Amsterday. Because that's a thing that happens in real life. Also people applauding them when they kiss for the first time, in the Anne Frank house. Because that is appropriate and realistic.)
General pretentiousness.

But I enjoyed it anyway!

I think part of it is that it's such a quick, easy read, and part of it is that I'm a sucker for that kind of thing. I also know that I probably would have LOVED this if I were 15 or 16, so the nostalgic part of my brain kicked in. I also like having a good cry, and this book definitely provided that. I don't really understand why so many adults are raving about it though. It is definitely a YA book.

...I'm going to ramble incoherently a bit now about Japanese dramas, this is probably only interesting to me, heh.

Reading this reminded me of one of my favourite Japanese dramas (because in my mind, terminal disease = enjoyment? I think there's something wrong with me..), which is called 1 litre of tears. It's about a girl called Aya who gets a disease which basically slowly shuts her body down over the course of 10 years. It's based on the diaries of a real girl who actually had the disease, so at the end of each episode they have an actual quote from the diary.. which is also really heartbreaking. Despite the fact that I haven't watched it for about 7 years, I can still vaguely remember the one at the end of the episode where she has to leave her school, where she says

My classmates are folding 1000 cranes for me. I want to burn this image onto the back of my eyelids so I can remember, even when we're parted. But... what I really wanted was for them to say "Aya-chan, don't go".

Ahem, anyway, if you like that kind of thing, 1 litre of tears is really really good. I'm not sure there's an official English version, but... *cough* fansubs *cough* Plus, it has good old footface Nishikido Ryo in. Yay! Footface!
投稿者 Jimjamjenny 時刻: 16:01