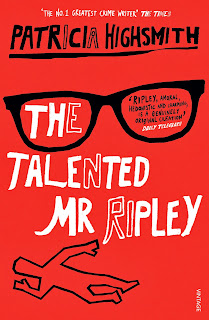 Seeing as I haven't been doing very well with updating, I have a huge backlog of things to post about.. so I'm going to not ramble as much as I normally do, yay!

I read this sitting on a beach in Okinawa in.. July? So forgive me if this isn't particularly detailed.
The story is about a person called Tom Ripley, who is asked to go to Italy to try to persaude his friend, Dickie, to come back to America by that friend's father. Ripley is a bit of a schemer, and has been running some scams in New York, and he slowly reveals that he's a bit of a psychopath.

This book made for good holiday reading, but it annoyed me on several levels.. First of all, Ripley complains about money and how he doesn't have much, but he still manages to get an all expenses paid trip to Italy. Pfft. Okay, so basically I was jealous of the idea that you could just go and live in another country and wouldn't have to worry about money or anything. Ahh, I wish I could do that! (Although given that I was reading this in the most sunny and beautiful place I've ever been to kind of negates a lot of my complaints, I guess!)

Reading this reminded me that I don't really like the style of writing. It's too.. emotionless? I don't know. I'm not entirely sure what it is, but I didn't really find anybody that believable.. maybe because I didn't really get their motivations for doing anything? One of my friends whose opinion about books I respect a lot loves Patricia Highsmith though, so it's probably just me.

The book is part of a series, and if I can get someone to lend me the later ones, or find a library with them (um, not terribly likely in Japan) I would be interested to read them, but I didn't enjoy this one enough to actually make an effort to get the other ones. So, all in all... meh.

(Has anyone seen the film of this? I can remember reading about it in teen magazines when it came out, but I think I was too young to actually see it (or too disinterested, hehe.))
投稿者 Jimjamjenny 時刻: 14:13