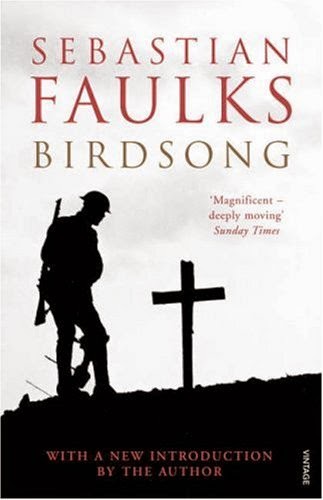 Birdsong mainly tells the story of Stephen, a young man who is initially sent to France to see the textile industry over there, starts a love affair, and then ends up fighting in the first world war.

I bought it a few years ago and only just got round to reading it. I actually started reading it once when I was still in 6th form (around 17 or 18 for anybody who doesn't understand the British school system!), and gave up when it got to the war stuff because I found it too difficult to handle. I had pretty much the opposite problem this time.

First, because I hate being overly negative, I'm going to talk about some things that I actually liked about the book. I found the bits that were focused on the actual experience of fighting in the first world war and life in the trenches really fascinating. I wouldn't say that I enjoyed them as such, because I'm not sure enjoy is the correct word to use with this kind of subject matter, but it made me realise how little I know about the whole thing. I liked the bits that were about tunneling and how tunnels were used to undermine (literally, I guess!) the enemy. I haven't read a huge amount of war literature, so I have no idea if this holds up when compared to other stuff, but it was interesting. Especially the bits that weren't focused on Stephen.

I did not find the whole love affair part of the story interesting in any way. I think maybe I'm becoming more cynical, but I find it really hard to get behind any kind of romantic relationship which is obviously just based on lust. I couldn't see any other reason that Stephen and the object of his affections (whose name I have forgotten) were interested in each other apart from that. Maybe that was the point, but I feel like it wasn't.

Also, Stephen just seemed to be a complete idiot. I honestly didn't really feel any sympathy for him at any point in the book. If he had been written as somebody that we're actively meant to not be rooting for, that would be okay, but all indications were that we were supposed to be on his side. And I really was not.

AND, awwwwkward sex scenes. I don't have the book on hand right now, so I can't provide any examples, but the descriptions were soooo bad. Urgh. Which is something that I am quite happy to forgive if the rest of the book is good (I'm looking at you Murakami!), because I understand that it can't be the easiest thing to write about well, but... yeah. urgh.

Plus, sexually assaulting a young girl to stop her from being interested in you is NOT THE WAY TO DO IT! Argh.

I basically would have liked this book to have focused on the war stuff, because that was interesting. I would have also probably enjoyed it better if it had focused on any of the other characters in the trenches with Stephen. At points it seemed like it was going to, but it always seemed to come back to Stephen, which I just found really frustrating because it meant that other potentially interesting characters were left completely undeveloped, and characters that I had started to care about had their storylines wrapped up in a really unsatisfying way.

I found the writing a little bit confusing at times as it sort of jumped between different perspectives, but there didn't really seem to be any reason for it to do that, it was just more that the author thought he should give a bit of backstory about some of the other characters and couldn't think of a better way to do it? Again, this would not have bothered me if I had been enjoying the overarching plot, but... yeah.

All in all, it wasn't boring, which is something, and I did end up getting sucked into it at points, but.. yeah. Sigh.

This has made me want to read more about the actual warfare in the first world war. I only hope that the next book about it that I read doesn't annoy me as much as this one did. If anyone has any recommendations, let me know!
投稿者 Jimjamjenny 時刻: 21:00