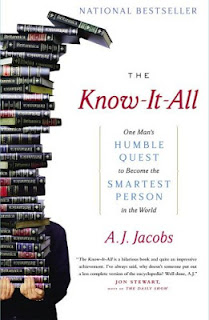 One of the things that I've realised as I get older is how little of all of the knowledge in the world I will ever know. Once I left university there was very little pressure to learn anything new. In fact, I would say that I was probably in the minority as I kept on actively studying after leaving (Yay Japanese I love you), but I feel like I’ve slowly become more ignorant about a lot of things which I probably should know about. My mind is full of useless knowledge about, for example, Buffy though. Buffy <3

Ahem, anyway, I’ve made a few attempts to sort of patch over holes in my knowledge by reading stuff, asking my husband who knows a LOT about lots of things I know nothing about – how the stock market works, for example, and generally being interested in stuff that I actively ignored when I was younger.. but to be honest, without anybody to push me into learning about things, or an interesting book about the subject, there are a lot of things that I will probably never know about. I think that a lot of people who are my age probably feel like that.

The author of these books, A. J. Jacobs felt that way too. It is one of the reasons that he gives for starting the project that the book is about: reading the whole of the Encyclopedia Britannica. Obviously this whole premise means that the book is a little bit dated now, as I don’t think that they even make print copies of it anymore. But, it’s an interesting idea! The book is full of interesting little facts, and the sort of self-deprecating humour that I prefer in my books. It also deals with the authors struggles to start a family with his wife, which as a married woman who is approaching her late 20s (late 20s is from 28 ish right?? I still have at least half a year to go, right??), is an area that seems much more relevant to me than it would have done a few years ago.

It also speaks to the side of me that used to spend hours on Encarta when I was little reading about... elephants and stuff. Because elephants are awesome.

The Know-It-All is ideal for pre-sleep reading, mainly because of the layout. Each letter of the alphabet is a chapter, and the chapters are split up into little segments – sometimes just a few lines long, sometimes a few pages – for words starting with that letter. This means that you can read for just a few minutes and be at a good place to stop. That is exactly what I want before I sleep, as I hate stopping in the middle of something. It also meant that I stretched this book out over a few weeks, which also made it more enjoyable!

I would recommend it for anybody who is looking for a light but interesting read.