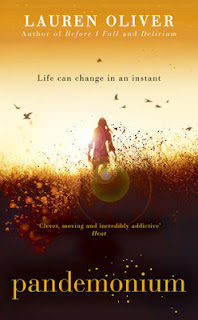 Pandemonium is the second book in the Delirium trilogy by Lauren Oliver. You can read my thoughts on the first book, Delirium, here.

As this is the second book in the trilogy, the post will almost definitely contain spoilers for the first book, so if you have any plans to read it and hate spoilers the way I do, stop reading now!

Like I said in my post about the first book, I liked it so much that I bought the second book as soon as I finished the first… and then I didn't touch it for a month or so. The more time passed between reading the first book and starting the second, the more I felt myself losing affection for the first book, and losing enthusiasm towards the second book. Which was weird, as that almost never happens to me. Sometimes it happens the other way round, in that I can find something not so great, but then realise later (or trick myself into thinking later) that it was much better than I initially thought.

So I was a bit… wary when I started reading it. I think one of the main things that I found put me off the series was not having ANY idea where it would go from the end of the first book, where Lena is basically left on her own, without any of the characters who you've grown to like/dislike in the first book. Which would be fine if you found Lena really compelling… but I’m not sure that I do. I think I’m more interested in what she does than who she is, if that makes sense.

Luckily, I remember while I was reading it that this series is written really nicely, and it’s very easy to read. In this book, the story is split between two different time periods – the time after Lena has escaped to the wilds, and a time six months in the future. This mostly worked well, although I wanted a bit more information to fill in the gap, as there are some things in there which I think would have been interesting which aren't really touched upon.

Much as I enjoyed reading the book though, the ending was stupidly obvious, and it seems like the next book is going to go down a road which I don’t really like in general in fiction of any kind. So I’m not rushing out to buy it. But I’m sure I will read it at some point in the near future.

So, not a glowing review, but if you liked the first one in the series, I think you would like this as well.
投稿者 Jimjamjenny 時刻: 21:00