Graphic novels! Or comics, I guess! I don't know! Yayyy! 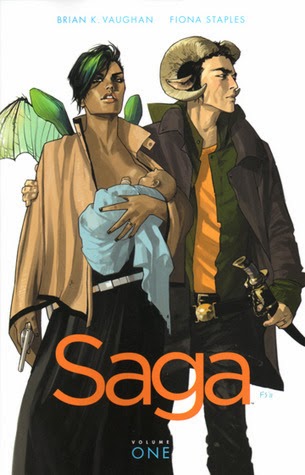 I had a book token which I won at work for being awesome, and decided to try saga, as I kept on hearing it being recommended, and I find it hard to justify buying graphic novels normally. I also wasn’t entirely convinced that I would like it. But I did! It’s insane! I can’t be bothered figuring out a way to describe it, so here’s what it says on Wikipedia:

"(Saga) depicts two lovers from long-warring extraterrestrial races, Alana and Marko, fleeing authorities from both sides of a galactic war as they struggle to care for their newborn daughter, Hazel, who occasionally narrates the series."

What that description fails to tell you about is all of the side characters who make it really interesting – the ghost of a girl whose bottom half is missing with her guts hanging out of it, the giant cat thing which can tell when people are lying and says so (even when it gets their owner in trouble), weird spider lady… and so on. If you’re looking for something that’s insanely creative, and are not bothered by graphic (I really mean this. This is DEFINITELY for adults) depictions of things like sex, violence, etc, then you might like it!

This is the one of the few graphic novels that I’ve read which is not biography or sort of gothy, and I liked it! I need to get hold of volume 3 now.

(I could not find a good picture of the cover of volume 2, but maybe that's a good thing if anybody squeamish reads this!) 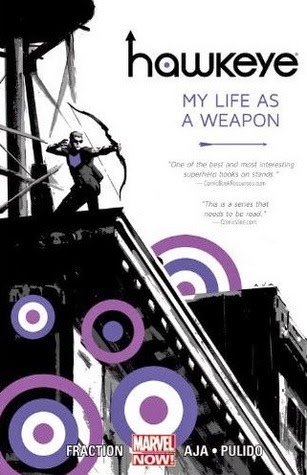 Hawkeye, Vol. 1: My Life as a Weapon written by Matt Fraction and illustrated by David Aja and Javier Pulido

I bought this as a Christmas present for one of my colleagues who really likes the Marvel films… and he lent it to me once he’d finished reading it! Yay! This was my first foray into normal superhero type graphic novels, and I really enjoyed it! Even though I didn’t really care about Hawkeye in the Avengers film (I had no idea who he was, and kept on getting confused, hehe), I heard that this was good, and what I heard was right! It was very entertaining, and I slowly grew to like Hawkeye over the volume. I also liked the art! At the end, there was a Young Avengers story which lost me a little bit as I had no idea who anybody is (this is what puts me off superhero things – there’s waaaaaaaaayyy too much history for most of these characters for someone who has problems jumping in in the middle like I do). Still, it was all enjoyable! Yayy!