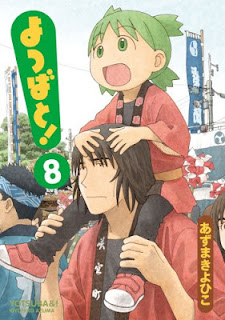 I wouldn't really call myself a huge manga fan. I have certain series that I like (Mushishi, Liar Game, Nana (um, until it started being stupid), Bakuman), but it makes up a really small percentage of my overall reading. So I’m probably not going to post much about manga on here.

But I’m going to make an exception for Yotsuba&!

I’m sure that I am not alone in having a stash of comfort books. Books that I can read when everything just seems to be going wrong, which either make me smile, or make me sad about other things which put my life in perspective (Or make me so sad that I end up laughing at how stupidly sad I’m getting, and then cheering up). Most of these books are ones which I read when I was growing up, and they’re all sitting on a bookcase in my childhood room.

I brought almost all of the DVDs  that I own with me when I moved here, so I’m never short on comforting things to watch, but I had to find something to replace the books.

So in comes Yotsuba&! (Which is also available in English!)

Yotsuba&! is the story of a little girl called Yotsuba, who lives with her dad. She becomes friends with her next door neighbours, a family with 3 daughters, and… well, goes on adventures sounds a bit twee, but that’s pretty much it.
Most of the chapters cover one event in a day, whether it’s going to the park to catch cicadas, or just Yotsuba and her dad going shopping. So far so… boring? Maybe.

But Yotsuba&! is great for the following reasons:

Although I do still miss my stack of English comfort books, knowing that I have Yotsuba&! there when I need a pick me up makes me happy.