Jen reads... The Remains of the Day by Kazuo Ishiguro

There is still one catch-up review post to come, but I haven't written it yet so... have a normal book review instead! Yayyy! 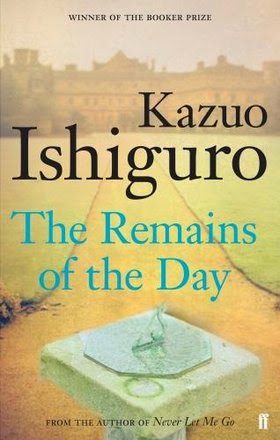 The Remains of the Day by Kazuo Ishiguro*

Difficult to give an idea of what this is about, but here goes...

The story is told by Stevens, a butler who has been persuaded to go on a motoring holiday as he reminisces about his past and realises some things about himself and his past along the way.

...oh dear, that sounds a little bit cheesy. Which this book definitely isn't!

To be honest, I really wasn't that into the book for all of the first section. I wasn't put off it particularly, but nothing really drew me in, until Stevens started delving into his past. He is a man so completely out of touch with his emotions, and so desperate to be the most dignified, stiff-upper-lipped butler there ever was that the narration, which is all in first person, reads like it is written by someone who doesn't feel anything at first. Like it was written by my husband when he is pretending to be a robot (my husband is a bit odd).

I think it was this that stopped the book from grabbing me at first, but it was also this precise thing that drew me in as the book went on. I found myself desperately trying to piece together how he felt about everyone around him, and what had actually happened in his past. He is quite an unreliable narrator, as he points out several times, but even before he does that it's made obvious that if nothing else, he is unable to read the emotions of others as much as he is unable to show his own (or is completely unwilling to talk about anything as undignified as his/other people's feelings). So the reader ends up having to infer 99% of what happened, which could have been frustrating in a lesser author's hands, but was one of the best parts of the book. I honestly think that this might be one of the best examples I have ever read of the narration showing rather than telling.

This definitely falls square into the literary fiction category (e.g. not a lot happens. His road trip doesn't suddenly turn into a magical adventure with unicorns and a dragon and stuff). But once I got past the first section, I really didn't want to put the book down, and I ended up staying up way too late to finish it, which is not something that happens that often with literary fiction (unless it's written by Margaret Atwood!).

The premise of the book didn't particularly entice me before reading it (the main reason I picked it up was that I'm on a mission to read all of the books that I already own** before buying any more***. Although this one is technically my husband's!) but I really liked it! So even if reading about the motoring adventures of a butler doesn't sound that interesting to you, I think it's worth giving it a chance. Um, if you haven't already, seeing as it's super famous.

*Writing Japanese names in the non-Japanese order makes me cringe slightly... a far cry from my first essay at university where I got the name order wrong for about half of the sources I cited written by Japanese people, haha.

** Due to being a cheapskate, not having much shelf space (or space to put more shelves) and generally not allowing myself to go too mad buying books for my e-reader, this is only about 8 or so English books (many more in Japanese, which sucks because I read so slowly in Japanese!), so not too daunting. Much as I love buying books, I think I would implode from stress if I had as many unread books as I know a lot of book bloggers do!

*** I'm currently only averaging 1 book for every 3 or so read, so I think I'm doing okay.. maybe? Bearing in mind that I haven't actually calculated this properly, and might be lying to myself. Hehe.
投稿者 Jimjamjenny 時刻: 21:30